Just finishing up work on a fun and rewarding project and am happy to report we will premiere at Sundance. I don’t always promote the films I work on, but this one was not only a pleasure to work on but it’s also really fun to watch. It has musicals, politics and vintage NYC, three of my favorite things!

This movie has a lot of archival film from NYC and Puerto Rico, spanning the 1960s-1980s. It was the first time I’ve worked on a project where the filmmakers were committed to using film-based archival scanned in 4K. A lot of the 16mm film prints we dug up had never before been scanned in HD, let alone 4K. I’m looking forward to seeing the result on the big screen.

When Luis A. Miranda Jr. left Puerto Rico for New York City in the 1970s, he had big dreams—but little did he know how far he’d go. Landing an influential position in New York City mayor Ed Koch’s administration as the director of Hispanic affairs, he built a career representing Latinx (and largely, due to their prevalence in the city, Puerto Rican) communities, helping to elect some of the most powerful politicians in the country.

Over the course of an intense year, Luis’s devotion to family and country propel him forward despite recent health issues. He finds that there is always more to do, especially when his beloved Puerto Rico is in need. Following the devastation of Hurricane Maria, he helps plan relief efforts and, to raise money and awareness, manages the logistics behind bringing his son Lin-Manuel Miranda’s award-winning production of Hamilton to the island. With humor and a lot of heart, Siempre, Luis tells the story of a unique and proud American. 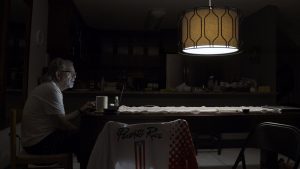 Following the screening, there will be a Q&A with director John James and special guests.

We need a new religion. I pointed my finger at a friend during the third glass of wine. We may think as progressives that…